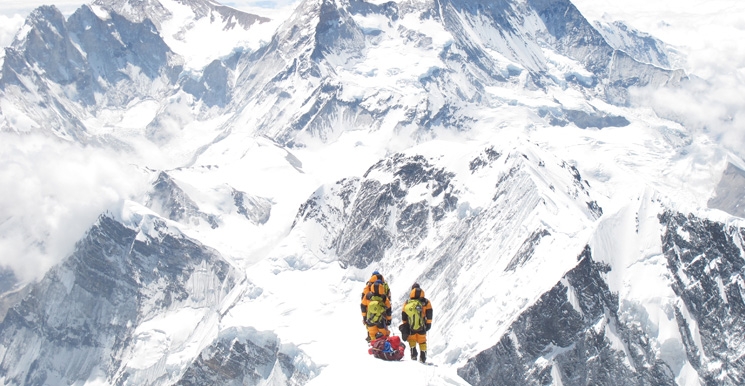 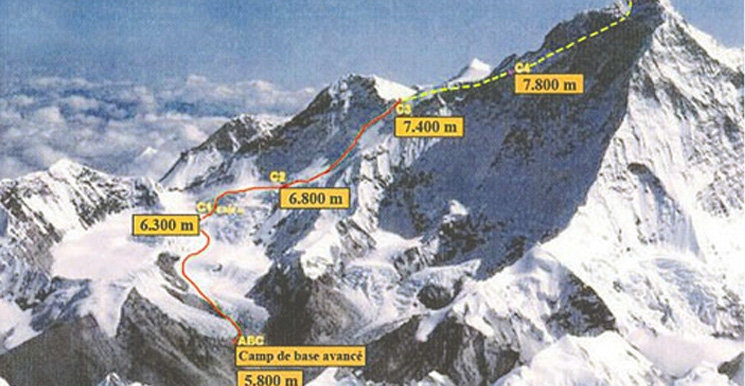 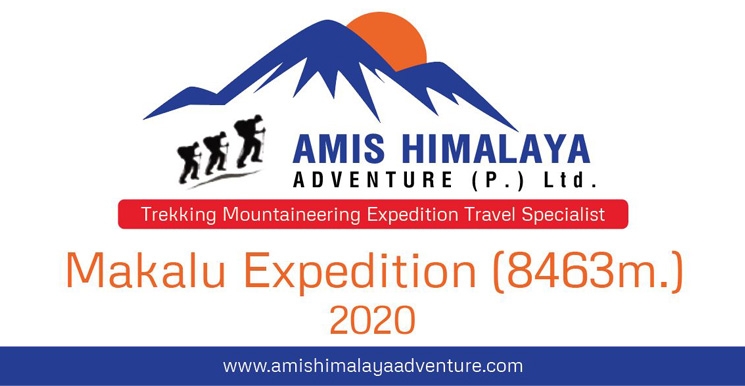 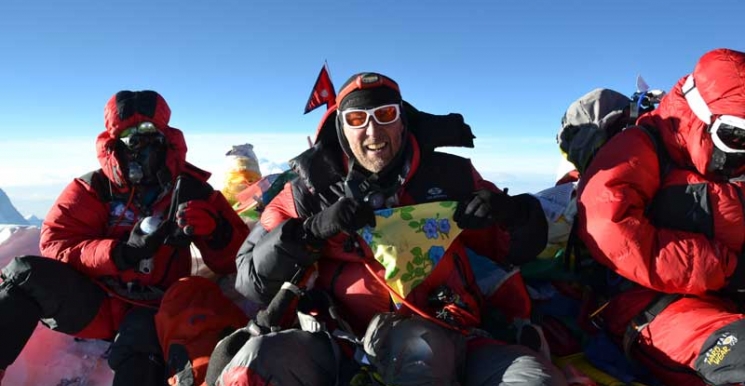 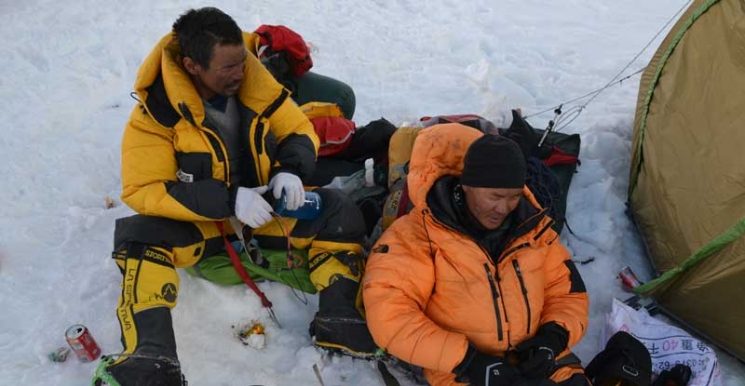 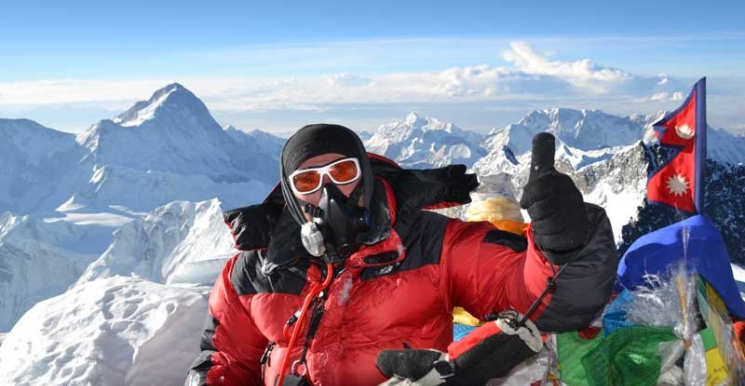 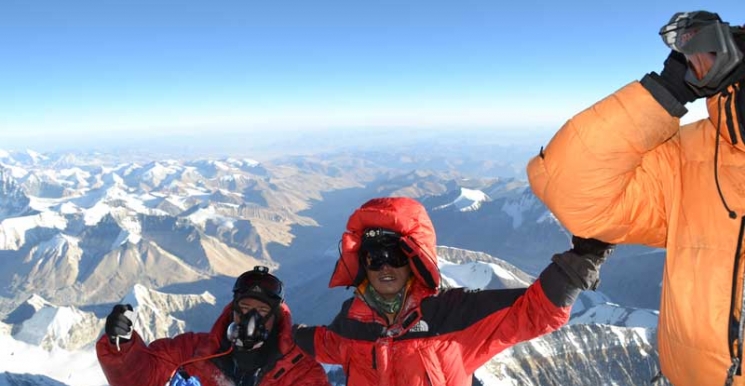 The peak was first mapped and photographed from the Tibetan side by the 1921 British Everest reconnaissance. Hillary and Shipton photographed Makalu during a side trip on the 1951 Everest reconnaissance. Hillary and others approached the peak a year later after the failure of their Cho Oyu expedition. The first attempt on Makalu was in 1954 by a US team, mostly from California, who trekked all the way from the Indian border near Biratnagar.

At the same time a British team approached the mountain, but this expedition was abandoned when Hillary became seriously ill and had to be evacuated. In the autumn of 1954 a French team attempted the peak. In the following spring, successfully ascents were made by three teams of French climbers on success five days. In 1960 a large scientific and mountaineering expedition wintered at the foot of Ama Dablam, occupying the Green and Silver buts. In May 1961, the expedition trekked across the Mingbo La and other high passes to the foot off Makalu, where they planned to climb the French route, Sickness stopped the expedition, which became a heroic struggle for survival. The Japanese climbed Makalu in 1970, another French team climbed it in 1971 and a Yugoslav expedition reached the summit in 1975. In 1976 Spanish and Czechoslovakian teams joined up near the summit.

Makalu, the fifth highest peak in the world rising to 27,765 feet (8,463 meters). This beautiful and impressive massive is situated just 14 miles east of Everest in the Khumbu region. Its size alone is impressive, but its perfect pyramid structure with four sharp ridges makes this mountain all the more spectacular. Makalu is actually a double peak. The subsidary peak rising just north of the main summit connected by a saddle is called Chomolonzo (25,650 ft.) It is interesting to note that the summit ridge is the demarcation point indicating the border between Nepal on the Southern side and Tibet to the North.

The name of the mountain was probably taken from the Sanskrit word Maha-Kala, which means Big Black and is a by-name of Shiva - one of the most important gods of Hinduism. Shiva is sometimes an evil, cruel destroyer but at other times he tends to be gentle and kind-hearted. The mountain has another name in the local dialect - Kumba karna, which means The Giant.

Makalu has proved to be a challenging climb, as only five of its first sixteen attempts were successful. To date, there have been a total of 206 successful ascents of Makalu and a total of 22 fatalities.

Prior to its first ascent in 1955, it was admired and studied by several Everest expeditions, but like a lot of other giants in the Khumbu region, it was not attempted until the summit of Everest was first ascended in 1954.

Our hand-picked Sherpas will provide full support all the way to the summit. Not only do our Sherpa mountaineering guides have many ascents of 8000-meter peaks to their credit, they are trained in mountain first aid and experienced in dealing with the symptoms of altitude related illness. Climbing with your own personal Sherpa guide allows you to go at your own pace and take advantage of a window of good weather. Your Sherpa will move ahead, fixing ropes, carrying loads of oxygen and supplies and setting up camps.
The trek into Makalu Base Camp starts after a short flight from Kathmandu to Tumlingtar, in the base of the Arun River Valley. The eleven-day camping trek to Makalu Base Camp is in itself an exciting trek through a remote and inaccessible region where few trekkers venture. This region falls within the Makalu Barun National Park and Conservation Area, famous for its outstanding natural beauty and diversity of flora and fauna.

The trek starts at just 400m altitudeand reaches 4800m in only ten days, passing through distinct vegetation zones from sub-tropical jungles, farmland and bamboo and rhododendron forests, to high alpine pastures. You will also observe the unique cultures of the Rai, Limbu and Newar ethnic groups which dominate the lower altitudes and the Sherpas of the higher regions.

At Kongma La, on the barren tree line, we get magnificent views of Kanchenjunga and Makalu. A steep ascent over rock boulders takes us up to the Shipton La Pass, 4229m from where we descend to Muga (Do Bato), the same altitude as Kongma La. Once again we cross the Arun River, and follow the deep gorge with juniper forest lining the walls on either side of us. The terrain becomes rocky with loose scree as we near Makalu Base Camp, 4800m. We stop for two nights to acclimatize and explore lovely high grazing areas at the tip of the Barun Glacier. There are breathtaking views of Everest 8850m, Lhotse 8516m, Makalu 8463m, Chamlang 7319m and Baruntse 7220m.

A quicker option to Makalu Base Camp
Taking a helicopter to Makalu Base Camp saves time and allows us to immediately begin acclimatization and work on the mountain itself. Helicopter flights are available at the climbers own expense. The cost depends upon passenger load.

See also: A quicker option back to Kathmandu
The Climb of Makalu via North East Ridge:

The Makalu Expedition begins Makalu Base Camp, 4800m and uses five camps above base camp during the expedition.

Typical Expedition Description:
After two or three days in Base Camp, organizing equipment and enjoying short walks in the valley, we make the 7 hour journey up the moraine and boulder fields of the Barun Glacier to Advanced Base Camp 5700m (ABC), perched on a rocky dome at the foot of Makalus glaciers. We rest and acclimatize at ABC, a sunny camp where we spend most of our time on Makalu, and where we enjoy the comforts of heated dining tents, kitchen tent, communications and hangout tent, internet access, and much more. Although sheltered from the wind and rock fall, it can be very cold.

From ABC the route covers a rocky moraine of the low-angle Chago Glacier. We put crampons on and rope up as the glacier is crevassed in places and there is some avalanche danger from falling seracs, though these can be avoided with good route choice. Just before reaching Camp I, 6347m, we ascend a steep ice-snow wall with fixed lines. On this first rotation we spend at least 2 nights in Camp I, and during that time make an acclimatization trip across easy glacier to Camp II, 6600m a small, flat sheltered area by some ice walls.

Our second acclimatization rotation stops for a night at Camp 1, and then continues in a north eastern direction across the huge crevasses and snow bridges of glacial slopes. There is a steeper section of blue ice below Camp II, 6670m. Our Sherpa will have fixed the ropes. From Camp II you get a fantastic view of Everest, Lhotse and Baruntse. We spend two or more nights to acclimatize, and during that time climb to at least 7000m on the steep slopes that leading to the Makalu La (Camp III). We descend to ABC for rest in preparation for our summit push.

Climb from ABC to Camp II
The climb from ABC directly to Camp II takes only about 6 hours once acclimatized. Camp II has fantastic views of Everest, Lhotse and Barunste. We probably rest a day before proceeding to Camp III, but our decision will depend on our physical state as well as the weather.

Climb to Camp III on the Makalu La
Above Camp II, an easy-angled glacier leads straight up to 6990m. Next, a technical section of mixed climbing to about 7250m, leads onto another open snow slope, which can be deep and prone to avalanches. There is one more mixed section of rock and blue ice leading up to the Makalu La at 7450m. To reach the site of Camp III, 7400m, there is 200 meters of flat walking. Some of the mixed climbing is up to an angle of 50 degrees. This is one of the most technical sections of the climb and we will appreciate that the Sherpa has carefully selected the route and put fixed lines in place. Remembering that we have to descend this difficult section, we try to carry the minimum to Camp III on the La.
The decision to ascend to the Makalu La requires careful consideration of the weather. Strong winds whip across the La, and temperatures can dip to -30 C.
Note: We start using oxygen to make the long steep ascent to Camp III, 7400m, on the Makalu La. We will use supplemental oxygen for the rest of the summit push and return to Camp III.

Climb to Camp IV
From Camp III, it takes only 3 hours to climb to Camp IV, 7600m, the last feasible spot for a camp below the summit. We traverse a large, flat glacier, with many hidden crevasses, and then follow snow slopes to a serac band, protected from avalanches. At Camp IV, tent platforms are cut in the slope, on the North Face.

Summit Day
On summit day, we climb moderate glacial slopes to the base of the French Couloirs, a shallow 300m high gully of mixed rock bands and snow that leads onto the summit ridge at around 8350m. We negotiate the summit towers along the extremely exposed ridge leading to the true but small summit of Makalu. This immense mountain has the smallest summit of all 8000-meter peaks. The summit view unparalleled: the panorama starts with Kanchenjunga in the east with a sea of peaks reaching to Shishapangma in the west.

Descent
Summit day is a very long and demanding day, often taking around 16 hours to reach the top and return back to Camp IV where we crash with exhaustion. Some climbers manage to descend to Camp III from the summit.

The next descent is demanding as we are exhausted, and must focus to abseil over the technical sections from Makalu La to Camp II, where we spend the night. We continue down to ABC to celebrate our climb, rest, and prepare for our return to Kathmandu.

Return from Expedition
The schedule allows seven days to trek back to Tumlingtar. We are accompanied by porters carrying our gear.

A quicker option back to Kathmandu:
At the end of a long expedition, a quick flight by helicopter from Base Camp to Kathmandu is quite appealing. Helicopter flights are available at the climbers own expense. The cost depends upon passenger load and whether the helicopter is already in the area or has to come from Kathmandu.

Day 02 : Preparation of Expedition in Kathmandu and Expedition Briefing in Ministry of Tourism over night at hotel with Bed & Breakfast plan.

Day 11 : Trek from Lower Base camp to Higher Base Camp Approx 5/6 7Hrs- over night at Tent Full Board Service.

Day 42 : Preparation to Return (Base Camp cleaning) over night at Tent Full Board Service.

Day 44 : Trek from Yangle Kharka to Khongma over night at Hotel (B/L/D).

Day 49 : Relax day after Long Trip over night Hotel in Kathmandu with B&B.

Book This Trip Tailor Made Trip

Accommodation during Expedition: All meals in lodges during Trekking & Camping